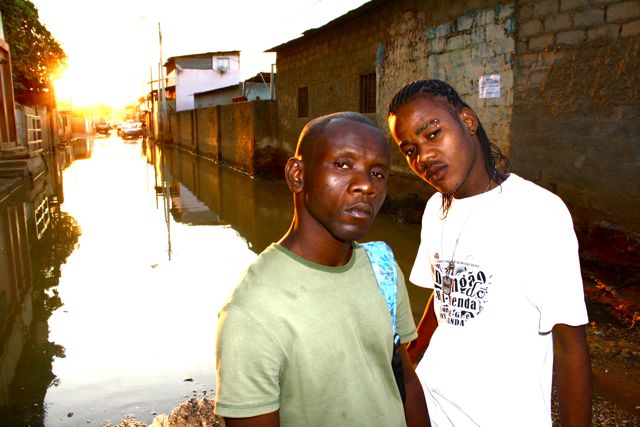 Heroy and Puto Mira form Vagabanda, a duo on top of kuduro in Angola. They’ve traveled all over the country, and are now looking at trips to Brazil and Portugal. You can find some of their videos online, but their actual music is still not very accessible – at least not legally. But it’s coming very soon here on Akwaaba. Heroy has been doing kuduro for about 8 years now, but success really came when he met Puto Mira and formed Vagabanda. Suga, Vou le Dar, M Yoyo… were all hymns in their own time here in Luanda. Especially in the barrios of Rangel and in Mira’s home, Marçal. We spent a lot of time there with the band, also meeting some of the DJs they collaborate with, DJ Fofu, DJ Kobe, DJ Lango, Bobo-G… cool cats with lots and lots and lots of kuduro beats.

The video to Suga has such poor sound, it makes me sick… so here’s proper audio:
Suga – Vagabanda & Agre-G