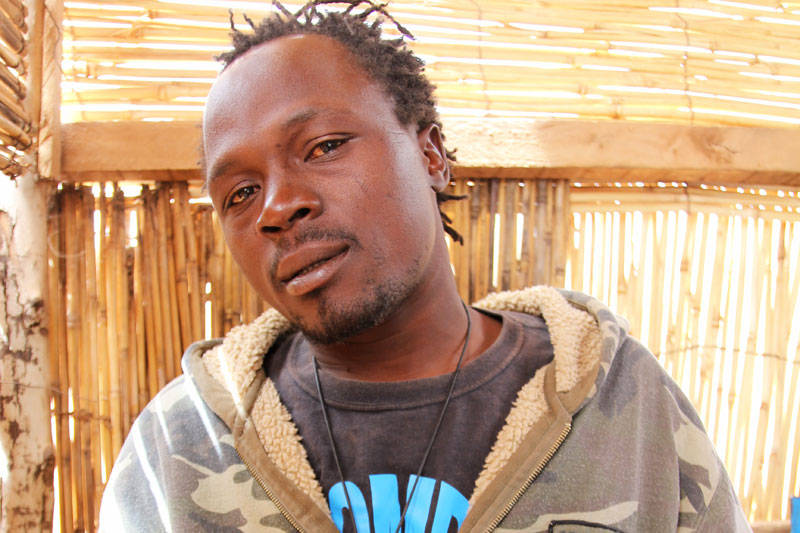 In West African tradition, the griot earns a living telling stories and singing praise. Rap as an art form has often been compared to the griots’ storytelling skills, but the social and economic models usually accompanying rap are very different: the ways of the music industry have little to do with how the griots’ art and knowledge have been spreading for centuries.

But once in a while, an off-the-wall MC pops up with no interest in the rules of the business and only one objective: to rap about what he sees happening, for the sake of art and truth, no matter who might get pissed off. This is Art Melody. Nicolas Guibert, a budding French documentary filmmaker, stumbled across him in Burkina Faso in 2008. That day, Melo was hawking customers into shared cabs for a few coins, in one of Ouagadougou‘s busy taxi ranks, just one of the many hustles for this persistently underground MC. Within minutes, Nicolas was captured by Art Melody’s rough voice and steady delivery, and decided to add a portrait of him in Tamani, the film he came to Burkina to work on.

At the time, Melo was very much working on the sidelines of the hip-hop scene, and had not released anything. Although he had been around just as long as Burkinabé rap pioneers like Faso Komba, Yeleen or Smockey, who remain relevant to this day, Melo was still a poorly known, entirely underground artist. However Melo’s untarnished love for hip-hop and speaking the truth helped him grab Nicolas’ attention, and the two have since forged a strong bond, which in turn has enabled the launch of Art Melody’s career. Nicolas returned to Burkina in 2009 with some beats to record Melo’s self titled first album, and the two were at it again two years later for Zound Zandé.

In the past three years Art Melody’s been traveling to Europe on a regular basis, mainly to perform and record in France with Nicolas and his roster of beat-makers: Redrum, Minimalkonstruction and DJ Form. I was quite late to discover Melo, but ever since I first heard him with Joey le Soldat as Waga 3000, I knew something was up. The raucous, harsh voice combined with the Frenchies’ hard-hitting, boombap, futuristic beats, was something I’ve never heard before.

The song here is a new one called “Futur,” featuring High Priest of cult hip-hop group Antipop Consortium. It was produced by Redrum and Minimalkonstruction, and mastered by Dave Cooley of Stones Throw and Spoek Mathambo fame. Don’t forget to check out the great video for Futur by filmmaker Jeremie Lenoir. This who’s who of high-quality collaborators simply shows how Art Melody’s raw talent gathers love everywhere it goes.

I was fortunate to spend a few days in Ouagadougou with Melo, to get to know him and the hip-hop scene in Burkina. I realized Melo is still in many ways an outsider, an artist with very little concern for how things are done at home. As long as he can speak his truth, gather enough cash to raise his two kids and set aside enough time to write, he seems perfectly content. Bending his own rules to appeal to the powers that be is not something Melo does. He does not give away smiles or flatter egos to get shows. As a consequence, his routine in Burkina has not changed all that much: no radio interviews, very few shows, very few collaborations with other artists. Melo remains willfully on the sidelines.

Despite this situation, I was fortunate to man the ones and twos for him and Joey le Soldat for an impromptu performance at the French cultural center. After hordes of other MCs left the public lukewarm, Melo and Joey commanded everyone’s attention. They took me back to my high school days, when hip-hop was all that mattered.

In the days I spent in Ouaga, this show was the only ripple in an otherwise quiet routine for Melo. Yet it felt like I was witnessing the quiet before the storm: Melo’s next album Wogdog Blues comes out in a few weeks, and based on the work that has been put into it and the feedback so far, this one is sure to blow much further, and much harder than his previous opuses. Besides, Melo’s quiet lifestyle can be misleading: he may remain in the shadows at home, but he already has something strong going on outside.

Stories like Art Melody’s are why I started working with music in Africa: here is an artist who comes from very little—literally coins in a taxi rank—and he’s now performing at festivals in France and beyond. It is a shame that his talent is not more recognized at home, but I believe that will change with this next album. Nicolas and his team have shown such tenacious, heartfelt support, as well as such talent and vision in how they are pushing Art Melody, and I am thrilled to be involved in his rise. It is only a matter of time before his dedication to hip-hop shines through to his own people in Burkina. As Melo took me around Ouaga on the back of his gnarly moped, a lone soldier under the unforgiving, dizzying Burkinabé sun, all I could hear was his unstoppable flow. Art Melody raps like he breathes—everywhere, all the time. I see talent all the time, but this level of dedication is a force to be reckoned with.