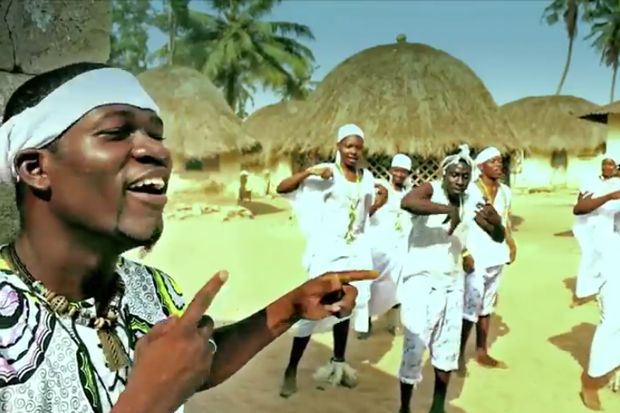 Originally published in the Lungu Lungu column for Fader magazine.

Living in Ghana, I am constantly bombarded with references to azonto, the dance craze which has taken over the country in the last year. If it’s not kids spontaneously busting out azonto moves on the street, it’s a grocery bag printed with a pattern made of azonto dancers. But a mere 120 miles away, in neighboring Togo, a very different dance craze has also taken hold. Cool catché may not be getting quite the online buzz that azonto has been generating, but it is just as unavoidable in Lomé as azonto is in Accra.

The cool catché’s pace is set by hit songs by groups such as Toofan. When I first heard their music, I thought they sounded like an Ivorian coupé décalé group, and I was quick to dismiss them, thinking they probably would never make it anywhere outside of Togo, since they are just imitating what others are already doing—a lot—in other countries. I was wrong. I was only listening to the music, and not paying attention to the dance. Toofan completely embraced cool catché—many say they invented the dance. Whatever the case may be, they’ve greatly contributed to its success, which in turn has propelled them beyond Togo’s borders. Their hits now play in Francophone clubs throughout the continent, in particular in Côte d’Ivoire, home to coupé décalé, where people know which cool catché moves to throw down.

But I’m still a music nerd, and even though I do find some of Toofan’s songs to be very catchy, I’ve been looking for groups pushing the musical boundaries of cool catché a bit further. Enter Kossi Ape’son. More of a traditional singer, he’s been around for a few years already, ever since he started under the patronage of King Mensah, perhaps the most influential Togolese artist of his generation. Backed by King Mensah, Ape’son ventured into Togo’s more traditional music, recording songs using some of the country’s countless rhythms and making two full albums out of it. He’s managed to tour West Africa, and has built a very decent name for himself, but in the age of paramount dominance of cool catché, there isn’t usually much room for anything else.

Luckily, cool catché is not a monolithic, unattainable sound, and Ape’son has quite an affinity for the catchy dance. He saw a natural proximity between cool catché and some of the native Togolese rhythms he grew up on, so he decided to fuse the dance with gazo, a fast paced traditional rhythm normally played on the gakokoe, a type of gong, and the aya, a type of castanet. I’m long overdue a trip back to Togo to school myself better on these rhythms, so check back in for some further investigations into the immensely addictive Ewé, Mina and Anlo rhythms.

With Ape’son, what caught my attention was the video for the song, which does not display Western, blingy surroundings, but instead shows a bunch of people dancing in a village setting. Simple concept, beautiful visuals: I often wonder why such videos are not more common? Now that the song taken over in Togo, I’m hoping its success will open doors to diversify the musicality of cool catché, so that the beats match the dance’s originality. Next up: let’s get this guy in the studio!