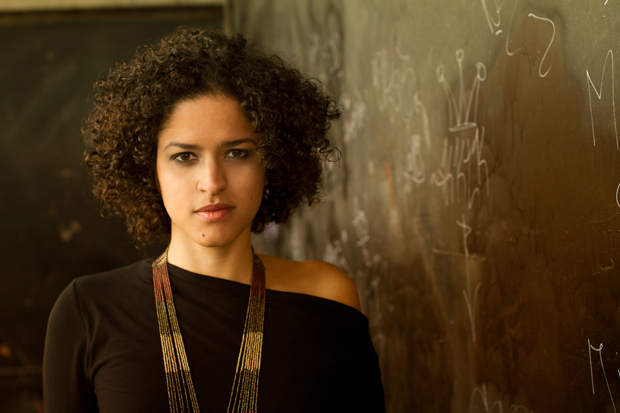 Originally published in the Fader under Lungu Lungu. Most people don’t know a whole lot about Lusophone music, meaning music from Portuguese-speaking countries. If anything, Brazil usually comes to mind first—in my experience, whenever I play music from places like Angola, the response is usually something like, “Oh, this sounds Brazilian.” It doesn’t, really, but there are definitely musical elements common to many genres coming from Lusophone countries. I assume it’s because the Portuguese colonized early, and were not afraid to mix with local populations. The Portuguese and their cultural influence have been around longer, and have penetrated deeper, than other colonizing powers.

Now fast forward to post-colonial times, and imagine a musician with Angolan, Cape Verdian and Portuguese roots. Raised in Angola, with family in Brazil. I would dare any Lusophone specialist to pinpoint where such music comes from. I like the idea that a specialist or layman might both be puzzled by Aline Frazão‘s music. A real mishmash of influences—and not all of them stemming from Lusophone genres.

“I cannot remember not being in touch with music” says Aline, who grew up in Luanda. She attended a Portuguese school, where she sang fado, and started performing in public from the age of 9. When she was 15, she heard an Ella Fitzgerald collection, and with it, discovered vocal jazz: “I felt like I was discovering a new dimension, the voice as an instrument… Jazz opened up doors in my mind.”

After she completed high school, she moved to Europe to go to university. Lisbon first, then Barcelona, then Madrid. As Aline puts it, her experience in Europe is itself a kind of musical education: she is exposed to other genres, has the opportunity to meet other musicians with different backgrounds, different focuses, and, just as importantly, she can perform for a wide range of publics. She now lives in Santiago de Compostela, a more quiet place where she can enjoy a slower pace and truly focus on her music. Santiago also happens to be at the heart of Galícia, which linguistically and culturally straddles in between Castilian Spanish and Portuguese.

Yet in the back of Aline’s mind, Luanda keeps calling. “Things are always changing in Luanda, the creativity and the public, everything changes fast. You can hear a new kuduro every day, a new artist, a new dance… For any artist, Luanda is an intriguing place, full of contrast, stimulating.” For Aline, Luanda is also home, “unable to be ugly,” a city that fascinates her intellectually and creatively, a place she would like to live in, eventually.

To my surprise, when I asked Aline what music she finds the most exciting at the moment, she started with conscious hip-hop—in particular MC K or Ikonoklasta, who collaborated with her several times for instance when he invited her to perform two years ago at the Teatro Elinga in downtown Luanda. Hip-hop played a crucial role in the city last year, as anti-government demonstrations sprouted in Luanda. This movement has barely been documented outside of Luanda; there’s hardly any mention of it in the Western media. As long as oil flows out relatively peacefully, why bother, right? But Angolans ask more of their leaders. Journalists get beat up or imprisoned regularly, perhaps contributing to the fame of rappers such as MC K or Ikonoklasta, who talk about Angolans’ lives and problems, and are becoming immensely popular. Aline tells me conscious hip-hop shows are always packed in Luanda, “from Sambizanga to Miramar”—the former one of the roughest musseques (shantytowns), the latter of the nicest neighborhoods.

Like many Angolans, Aline also holds Paulo Flores in a special place. Paulo is perhaps the only mainstream artist in Angola to have preserved his independence, hardly ever signing deals with demanding sponsors (most major corporations in Angola are held with an iron grip by people in the governments’ close circles). In other words, if you are an Angolan artist and you speak a bit too freely, you probably won’t get an endorsement, or slated to perform shows, which are always sponsored by these same corporations. So no real career prospects. Paulo has somehow managed to never lose his edge while still occasionally working with sponsors, rising today to the helm of Angolan pop music, without ever sacrificing depth in his music.

Back in Santiago, Aline continues to write and perform, sprinkling in elements from her Angolan roots into a potent, yet very polished sound. Fans of bossa nova—there we go again with the Brazilian resemblance—will love Aline. The song I picked here is irresistible, have a look at the lyrics of the song (in Portuguese, but Google Translate seems to be getting most of it right). I am always utterly impressed by love songs that have not one ounce of cheesiness in them. It’s a thin line, one Aline rides with grace and power, as she does throughout the rest of her fantastic album, Clave Bantu.