Brand new video from Steloo and Yaw P! Watch and spread, and read the story (originally published on Fader’s site):

Accra has over 30 radio stations. That’s a lot, and compared to other cities I’ve lived in, there’s a lot of music actually worth hearing. I’ve heard kuduro on the radio here, Congolese music, even 1980s electrofunk! And of course tons and tons of azonto, afrobeats and hiplife. With that said, when it comes to playing contemporary Ghanaian artists making music that is not mainstream, suddenly there is a significant void.

There are pockets however, as certain radio stations and certain radio personalities keep an open window for new sounds and new ideas. Such is the case with Eddy Blay, a Ghanaian music industry veteran, who now has a primetime show on Accra’s X FM. In the mid-2000s Eddy had a show on Vibe FM, where he occasionally played house music. This is where Steloo first heard house: “This guy had some crazy stuff,” he recalls of Eddy Blay. “The way he was jamming to the music really got me going.” This was a turning point for Steloo: “Everyday the virus grew stronger in me, then I became a full addict.”

Meanwhile, Yaw P was rapping with a partner who made beats, but after the producer left, Yaw started creating music himself and took an interest in forging his own sound. “We couldn’t do what we are doing if we didn’t have our own studio. The engineers wouldn’t have the time to discuss what we are trying to do, because they have a bunch of other people coming through.” So Yaw P was fortunate enough to be able to experiment with his sound. When he met the house-lover Steloo, the duo gelled and came up with their unique sound, a hip-hop backbone with strong electronic music elements.

When Yaw P and Steloo contacted me, they were pushing “Oi Mate,” an intense techno anthem which I assumed to be coming from London:

I was wrong. The duo is local and I met them shortly after. We bonded over our eclectic electronic taste, and since then they have been sending me track after track of surprising, creative electronic music. But this last track sped things up quite a bit: “N’agba” is dubstep. Mixed, of course, with some dope acoustic drumming. The result is something out of a rave—only filled with Ga fishermen.

“N’agba” means problem in Ga. Yaw P was already working on a dubstep beat when Steloo picked it as the backdrop for his concept. In the song Steloo asks defiantly: What’s your problem? Aren’t you happy? Should I get you a bottle of Fanta for you to be happy? He also tells me “the beat itself has that vibe of, ‘Who really wants to cause a problem? Who do you have a problem with over here?’ It has some attitude in it.”

Although here in Ghana there isn’t that much space yet for their sound, the duo have been encouraged by a number of key players: Eddie Blay still supports Steloo, and helped him land a radio show on X FM. DJ Vision, an old friend of Steloo’s now at Y FM, is also a big backer of house music in Ghana, and he has helped push Steloo and Yaw P’s music. Accra[dot]Alt have also pushed the duo, offering them a spot for the second time at their recent (amazing) Ind!e Fuse event in Accra. It’s exciting to see such different people coming together to promote an innovative sound, and it was equally exciting for me to sit down with Yaw P and Steloo to witness how focused and committed they are. 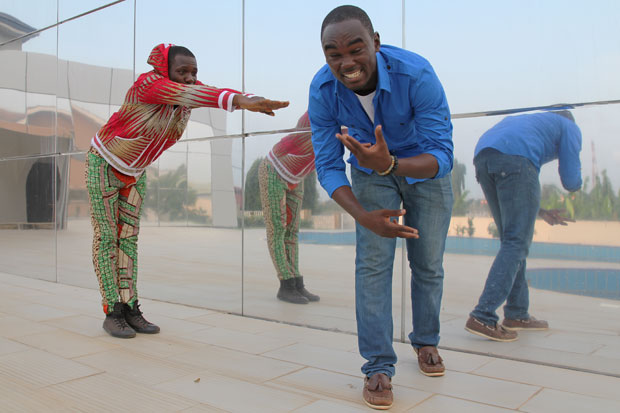 Since they have covered most potential outlets in Ghana, the two spend lots of time pushing their music online, posting and connecting with the world via Facebook or Twitter. Among other things, this DIY strategy got their music to be played on Big Brother Africa, arguably the most influential pan-African TV show. It is also how I connected with them!

Today, the two remain hungry for new musical discoveries, Steloo actively researches music as he puts together his weekly show on X FM, while Yaw P is relentless in the studio, dishing out beat after beat: together they keep expanding, and judging by the increasing quality of their music, we are in for many more rounds of musical treats.