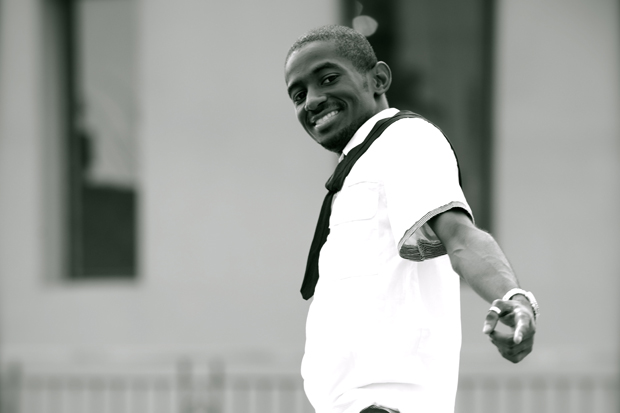 (Originally published in the Lungu Lungu column for Fader magazine) It pains me to say it, but it appears kuduro is seriously fading out in Angola. It’s so hard to believe. I was there just two years ago, and kuduro was blasting out of every single candongueiro and radio station, all day long. But there is hope! A lot of hope, as producers trained on kuduro are still behind the decks. If you’ve been reading this column, you already know about my current addiction of choice, Angolan afrohouse. Well, here’s a second round of Mwangolé dopeness.

DJ X-Trio grew up in Luanda. In 1999, he met one of his friends’ older brother, DJ Clioo, there. At the time, Clioo was a big-shot kuduro producer—one of the hits under his belt is the famous (for Angolans and kuduro nerds) “Wakimono” by Nacobeta. When X-Trio saw all the gear at Clioo’s house, he nearly lost it. He, however, had absolutely no gear. With no laptop or even headphones to work with, he took full advantage of his one and only USB stick, which he used to carry the Mixvibes DJing software around with him all over town. He’d hop around and install it on any computer he could get his hands on, practicing his DJing skills while visiting PC-equipped friends.

A year later, he traded a bottle of Calvin Klein perfume to get his first pair of headphones. Then in 2003, he got a hold of Fruity Loops, which he also put on his pen drive, and would now wander town in search of PCs to install the software on. This is how X-Trio started making beats. At the time he tried to reproduce some of the current kuduro hits, which explains X-Trio’s incredible strength with drum patterns. Eventually DJ Clioo recommended X-Trio hone his skills with kizomba, to get a deeper feel for creating melodies and baselines.

But here comes the best part. For years, while he lived in Namibia where his family temporarily settled (the civil war in Angola only ended in 2002), X-Trio made kuduro and kizomba beats, which in Windhoek were not exactly the latest rage. In 2008, he DJed at a school event, and was spotted by the founders of the brand new Fresh FM radio station, which specialized in increasingly popular South African house. The guys invited X-Trio for an interview the very next day. X-Trio knew kizomba and kuduro was not what the listeners were after, so he said he also produced house music, which he didn’t. The hosts asked him to bring some tracks to play on the air. So X-Trio went home, locked himself in front of his laptop, went through the South African tracks he had on it for inspiration, and got busy. The next morning he had finished his two very first afrohouse tracks, which he brought to the radio. The feedback was good, and the radio instantly started playing the songs!

That is how X-Trio started producing afrohouse. He’d adapt current hip hop hits, made a bunch of remixes and kept sending his music to the radio, which kept playing his songs.Shortly after X-Trio finished high school in Windhoek and moved back to Luanda, now capital of a peaceful (albeit still almost as wild) country, where he started university. One day a friend shows him the track “Jezebel” by Professor, a South African house classic. X-Trio thought it sounded cool but says, “it could never work in Angola, it’s too soft.” So instead of meticulously focusing on his computer programming class, he put on his headphones, in class, and started working on a remix. By the time school was finished, he’d put his kuduro programming skills to good use, and added the intricate drum patterns you hear on this remix:

At Afrohouse was not getting any kind of attention at the time (2008) in Angola, probably because in general it was more soulful and melodic than percussive. Too soft in a world where kuduro sets the bar (can you imagine a place where kuduro sets the bar? DOPE). But after passing his track around for a few weeks, X-Trio’s remix became a hit in Luanda. From its popularity, Angola discovered Professor. The same story happened a few months later with another South African hit, “Fairy Tale,” by Liquideep. X-Trio amped up that track too, shaping it into a proper Angolan hit song with complex and heavy drums. Since then, both Professor and Liquideep have performed in Angola.

X-Trio was not alone in bringing afrohouse to the forefront. He tells me the first massive Angolan house hit was “Elegom Bounsa”by DJ Djeff and Maskarado, which I am proud to say I noticed last year, and released on Akwaaba. Others, such as Silyvi (also featured on the Akwaaba Remixed compilation) Renato Xtrova and Dutch housemeister Gregor Salto have contributed to bringing afrohouse to the forefront of the Angolan music scene. I initially assumed afrohouse was somewhat of an elitist trend, confined to the posh clubs of Luanda’s Ilha. I was wrong. X-Trio tells me candongueiro’s now blast afrohouse across town. Unbelievable!

Still, X-Trio is restless. He is now studying sound production in Cape Town, after his fame finally convinced his father to let him pursue music, apparently not an easy feat. Once he finishes the program of stufy next year, he wants to jump into film production. His goal is to master all creative aspects of the business, from making beats to making music videos, in order to create a proper record label in Angola. So while his songs are still free and available, I highly recommend you check out the rest of his output here. I had a really hard time picking one song to feature here, and went with the one which is the most historically relevant. But others are just as relevant on the dance floor. So before he is signed to a major label who pull down bootlegs, enjoy them while they’re still up!